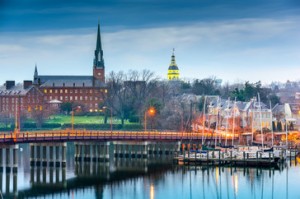 Eastport is well-known in the Annapolis community for its tongue-in-check succession from the city in 1998.

Next on our tour of our state’s capital is Eastport, a neighborhood of Annapolis, with its own particularly unique history.

Eastport, located just across the bridge from the City Dock area of Downtown Annapolis, is the maritime district of the Maryland state capital, and America’s Sailing Capital. Eastport was an important staging ground for Lafayette’s troops during the Revolutionary War, and acted as the site of Fort Horn which protected the city harbor from the British fleet. It played the same protective role during the War of 1812.

Eastport is well-known in the Annapolis community for its tongue-in-check succession from the city in 1998. The residents of Eastport felt their neighborhood would be hurt by the temporary closing of the Eastport Bridge for repairs, and jokingly established the Maritime Republic of Eastport. The two neighborhoods of Eastport and Main Street Annapolis now participate in a yearly “War”, in the form of an annual Tug of War for charity.

Eastport has a diverse range of housing, from historic homes dating back to the early 1900s to modern homes built within the last few years. The area’s real estate is on the rise – the average price per square foot for Annapolis MD was $255, an increase of 5.8% compared to this time last year. The median sales price for homes in the past four months was $412,000 based on 18 home sales.

Like Annapolis proper, Eastport has a number of restaurants that offer a wide variety of cuisine and ambiance choices. Popular choices include Carrol’s Creek, which offers fine dining on the waterfront, Lewnes Steak House, a family-owned steak house with an impressive wine list, and the Chart House Annapolis, which provides views of the U.S. Naval Academy.

The Team Edge is your Expert on Eastport, MD.

This entry was posted on Tuesday, October 20th, 2015 at and is filed under Blog, Maryland Neighborhoods . You can follow any responses to this entry through the RSS 2.0 feed. Both comments and pings are currently closed.