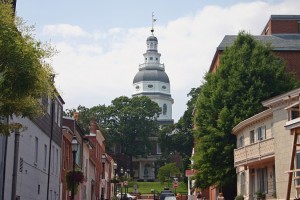 Today, in our continuing series on the pasts of historic Maryland neighborhoods, we discuss one of the most historied cities of Maryland and the United States of America as a whole. Annapolis Maryland has a rich history beginning with its founding, through the colonial era, into the revolution, civil war, and into contemporary history.

England had just gone through the English Civil war, which had ended in the beheading of King Charles I and the exile of Charles II. Parliament now controlled the “Commonwealth of England”, and one of the primary reasons for the war was that the nobility and gentry perceived Charles I of trying to make the Anglican Church more Catholic. The problem for the Second Lord Baltimore was that he was Catholic, and his father, the First Lord Baltimore George Calvert, had gotten the charter for Maryland for the express purpose of making a colony where Catholics and Protestants could practice their religion freely without interference from each other.

When Leonard Calvert, the second Governor of Maryland died in 1947, the Second Lord Baltimore needed a new governor and had to appease Parliament, but also ensure that he could maintain the religious freedom that Maryland was founded on. William Stone, and his followers, were known to be friends of Parliament and the colony of Virginia, who declared loyalty to the Charles II in exile, exiled them from Virginia. The Second Lord of Baltimore saw the opportunity and commissioned William Stone as the new Governor of Maryland. This secured the Second Lord Baltimore’s proprietorship of Maryland.

William Stone and his followers first made a settlement called Providence in 1649 on the northern shore of the Severn River. It was soon moved to the south shore with a more protected harbor. The town underwent several name changes including “Town at Proctor’s”, the “Town at the Severn”, and was later named “Anne Arundel’s Towne” after the wife of Lord Baltimore. The town was finally named Annapolis in 1694 after Princess Anne, who was close to ascending to be Queen of Great Britain.

Annapolis would grow throughout the seventeen hundreds, serving as an important port of entry, political and administrative capital, and major center of trade. It’s position made it the temporary capital of the United States after the signing of the Treaty of Paris. Congress met in session in the state house there from November, 1783 to June, 1784, and it was General George Washington resigned his commission as commander of the continental army. However, its expansion was not to last as Baltimore had a deeper harbor and was made a port of entry in 1780, and not long after growth began to decline in Annapolis.

The “Annapolis Convention” held in 1786 was meant to be a convention at which delegates from all of the states could come to discuss regulating commerce. However, delegates from only five states attended. It was here that the delegates decided to call for another convention to convene in Philadelphia in the following year. At the convention they intended to amend the Articles of Confederation. The Philadelphia Convention in 1787 ended up becoming the Constitutional Convention, at which the Constitution of the United States was drafted and approved.

The United States Naval Academy, an important educational and military institution was founded in Annapolis in 1845. It was created by the Secretary of the Navy George Bancroft, after an incident on a school ship the Somers, in which three crew members were executed for mutiny, including the Secretary of War’s son. The United States Naval Academy’s initial class was of 50 midshipmen with 7 teachers, currently the academy teaches 4,576 students and has an academic staff of 510 people. The future of the academy did become uncertain during the civil war, when a quarter of those there, including some founding faculty, resigned their union commissions and instead fought for the Confederacy.

During the American Civil War, the United States Naval Academy fell into disuse as a school and became a military base. Students in the last three years of their education were sent to sea, and those younger were evacuated to Rhode Island. While the academy became a base, Annapolis had a prisoner of war parole camp set up in it. As the war continued and more prisoners were taken, the camp had to be expanded and moved to a location outside of the city. The area is still known as “Parole”. The hospital in Annapolis also served to treat wounded Union and Confederate prisoners.

After the Civil War the United States Naval Academy returned to use, expanded, and was modernized under new leadership. Annapolis has grown steadily, as a historic city with many historical buildings, roads, and institutions. For example, the Maryland state house is the oldest continuously used legislative building used in the United States. Other institutions include a history of theater groups including the Colonial Players, Annapolis Summer Garden Theatre, and The Naval Academy Masqueraders. Museums including the Banneker-Douglass Museum, about the history of African Americans in Maryland, Preble Hall, the United States Naval Academy Museum, and the Hammond-Harwood House and The Paca House and Garden, both of which are historic colonial homes.

The Team Edge is Your Real Estate Partner in Annapolis

At The Team Edge, we recognize the importance of knowing a neighborhood’s history and notable features when it comes to trying to buy and sell real estate. Whether it’s in a well-known city like Annapolis, or lesser known neighborhoods in the state or across the nation, The Team Edge has the resources and knowledge to buy your home quickly, and at a good price. We can make selling your home easy and fast with a guaranteed price that can be delivered in a lump sum payment.

This entry was posted on Monday, February 23rd, 2015 at and is filed under Maryland Neighborhoods . You can follow any responses to this entry through the RSS 2.0 feed. Responses are currently closed, but you can trackback from your own site.